The Real Reason For The Measles Frenzy In South Africa

There is a whole lot of media hype going around about “measles outbreaks”. Please check the facts before giving into fear and sensationalism!
An outbreak by definition is a *widespread* occurrence of an infectious disease in a community at a particular time. 20-30 cases does not qualify as an “Outbreak”.

South African government owns 47.5% of Biovac shares. Biovac manufactures the new measles vaccine MeasBio. If you think the fear mongering, sensationalism and hype over MEASLES has anything to do with a measles “outbreak”, think again. South African children are being used as guinea pigs while our government profit off them.

Read about how Cabinet has approved the transfer of Biovac Shares here.

Our regulatory authority, the Medicines Control Council that is tasked with the oversight of this matter, has also shown that it is operating similar tactics to the FDA in terms of its ethics. As an example, a controversial article R204 in terms of the 1965 laws was instituted in 2002, which was opposed by both the pharmaceutical trade and CAMs industry for different reasons. It also prevented the import and sale of unregistered natural medicines by a company that was not licenced to do so. Late last year Mrs Nkosizana-Zuma opened the first of many Chinese Health centers in Gauteng, with the result that the legality of the company and its products were officially questioned by the Traditional and Natural Health Alliance in a letter sent to MCC and the minister of Health. They were given 30 days to respond, which was duly received within a few hours of the deadline. What was most surprising was that a government notice, R204 which had been opposed for 13 years without the MCC budging, was suddenly repealed by Government Gazette on the same day by the Registrar of the MCC that does not have the statutory authority to do so.

Follow the money :
“Biovac supplies over 25 million doses of vaccines annually to the South African EPI”
Cost of measles vaccine R226,40.
Biovac is the only vaccine manufacturer in sub-Saharan Africa and it currently sources the vaccines it supplies to the Department of Health from appropriately registered pharmaceutical companies in South Africa.

Nearly half of Unicef vaccines are funded by the Global Alliance for Vaccines and Immunisation (Gavi), with about two-thirds of Gavi-eligible countries being African.

Since 1999, the Gates foundation has committed US$2.5 billion to GAVI.

Biovac and our government get funding from the Gates foundation (through GAVI) to ensure all our babies get their shots. Bill Gates is famous for saying that he will ensure population control through vaccination.

The MeasBio vaccine is being administered to 6 month old babies, yet it has not been approved for use on babies under 9 months old. The South African Dep. of Health are taking a gamble with our babies’ lives!

The new MeasBio measles vaccine is NOT Halaal or kosher and contains pork derived gelatin.

The Majlis said “IT IS NOT PERMISSIBLE TO BE VACCINATED. THE IMPERMISSIBILITY IS AGGRAVATED BY THE PORK INGREDIENT IN THE VACCINE.” 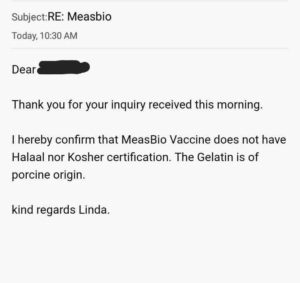 NATURAL PROGESTERONE THERAPY
A Natural Alternative for Parvovirus in Dogs

END_OF_DOCUMENT_TOKEN_TO_BE_REPLACED

Guidelines to Being Prepared for, and Managin...